No. The baby hasn’t come yet.

Yes, I’m grumpy about that (though not yet quite as grumpy as I still am about the fact that apparently he won’t be arriving via the international terminal at Gold Coast airport but via a significantly smaller and much less efficient terminal located closer to home – like just south of my bellybutton).

No, he’s not even technically due for another twelve days and he stayed inside as commanded until Mike arrived, so I know I have no real right to be unimpressed with his lack of interest in relocating but I am anyway. So anyone who’s tempted to leave me reasonable reminder below about how he’ll come out when he’s ready and not before… don’t.

And, yes, Mum and Dad are so thrilled to be watching this waiting game unfold up close and personal and Mike is over the moon to be sharing a continent (and a bed) with me once again. I’m sure Mum’s and Dad’s recently made plans to go up to Brisbane for a couple of nights next week and Mike’s refusal to go out on a hot date with me to Byron Bay last night in favour of sticking closer to home have nothing to do with any tropical storms of moodiness swirling around here.

This morning as we were tidying up Mike picked up a postcard announcing the arrival of a friend’s baby.

“What do you think about printed baby announcements?” Mike asked.

“Money, for one,” I said, flopping onto the bed. “It would cost a ridiculous amount of postage to get these out to everyone who might care that we’ve just had a baby. Even more importantly, it would take a ridiculous amount of time to track down everyone’s addresses and get them in the mail. If you want to do them you are on your own, buddy.”

For an instant Mike looked at me as if being on his own was sounding quite appealing and I felt a little bad. Enough bad to make me ask him what he thought. The problem was, my question came out sounding less like a genuine query than a grudging acknowledgement that a conversation should involve the reciprocal exchange of ideas even though I had absolutely no intention of changing my mind on this issue.

Luckily for both of us, Mike doesn’t seem too attached to the notion of printed baby announcements.

This discussion/diatribe has, however, made me think again about how we’re going to get the news out about little baby McWolfe’s arrival – you know, when that actually happens in 2043. 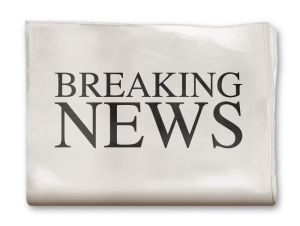 When we got engaged, Mike was surprised and a bit appalled to discover that I felt there was an important pecking order that needed to be followed in terms of breaking the news. We should, I told him, make every effort to let our parents know first, followed by our siblings, followed by very close friends, etc. We followed a similar process with the news that I was pregnant (with the exception of the fact that the entire country of Laos knew before some of our closest friends due to the fact that near strangers on the street there were completely uninhibited about asking me if I was pregnant yet).

I don’t think we’ll be shooting for a similar, carefully-managed process with the news of the baby’s arrival.

During the last two weeks I’ve had friends ask how I’ll let them know when I go into labour, assume that I’ll share when we’re off to the hospital via facebook, and take for granted that we’ll be calling or texting people shortly after the birth with the big news. And until I started to think through the mechanics of it, I thought some of that might be happening as well.

But when I pause to project forward I suspect that when I do go into labour, as much as I adore my close friends, I won’t want to be thinking about sending emails or updating facebook. And without Australian mobile phones of our own, Mike and I also lack most of our friend’s phone numbers. Those that we do know are scattered here and there – tucked away in emails and on slips of paper.

So, upon reflection, I’ve decided on a very complicated “breaking the news of the birth” plan that goes something like this:

If you object to this plan, feel free to ring and take it up with me. Mike would warn you to tread carefully, very carefully, should you decide to lodge a protest, but I don’t know what he’s on about really – it’s not like I’m grumpy or anything. No, I’m not even going to snap at him one little bit when he reads this and points out I have drafted a plan for breaking the news before I’ve drafted a birth plan or finished packing the bag for the hospital.