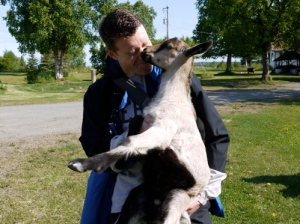 It’s going to be a childhood-themed week – later this week I’ll be posting on author’s favorite children’s books. So in keeping with the theme, here’s Mike’s list of childhood experiences that will probably sound foreign to our own kids (heck, some of them sound foreign to me).

OK, OK, so I might not be doing many dishes here (thanks to the services of our wonderful maebaan) but I am making our own baby food. My first attempt ended in Dominic’s first temper tantrum, but my latest effort was received with much happy table thumping and head-bobblings of approval.

“What did you make?” my mother asked when I told her this.

“Garlic?” both my parents said at the same time. “We’ve never heard of anyone feeding a baby garlic.”

What did your kids love to eat when they were little?

Yesterday one of my good friends, Abi, left this comment on my post about joy: “the sight of mini-Mike grinning as he leans back in the safe nook of maxi-Mike’s knee definitely came as a welcome joy-boost.”

Today I have for you a one minute video, in two acts, of Dominic in that “safe nook”. The first time Mike showed it to me I said it wasn’t funny. Then I had to admit that it would have been a bit funny… had it been someone else’s child.

Without further ado, here are the adventures of Mike and Dominic at 6am.

A three year “anniversary” in Bumrungrad

We are still in Bangkok in Bumrungrad hospital. Mike is still in those sexy green PJ’s with an IV line sticking out of the back of his hand and plastic bags full of Dalacin and Ceftriaxone hanging off a metal stand above his head. Periodically air bubbles get in the line and the machine emits a loud and obnoxious beeping that doesn’t stop until a nurse comes and sorts it out. Yesterday’s last course finished dripping into his veins at 11:20pm, and nurses came in this morning to take his blood pressure at 5:15am – which I think is a ridiculous practice. Why would you wake someone out of a restorative sleep every morning in the five’s just to take their blood pressure when they’re clearly in no imminent danger?

Yes, three days into this and our serene gratitude has started to disappear at odd moments. It’s like my good mood just takes off and wanders downstairs to the Starbucks to get a cup of coffee, then saunters back in some time later and acts all surprised to find that pissiness has taken up residence in its absence.

“What’s your problem?” my sensible and cheerful self asks in these moments, genuinely bewildered. “You’ve really got it very good. Mike’s getting much better, there’s a McDonalds downstairs, they sell Haagen Dazs in the gift shop, and the shower here is awesome.”

“Just shut up,” my pissy self answers. “You’re annoying.”

So here’s the update: Mike is getting much better – the infection seems to be disappearing rapidly, though we both had an expectations readjustment yesterday when the smiling doctor suggested we may not get discharged until Monday.

“We trust your judgment,” we told him yesterday. “If that’s what it takes we’ll stay until Monday.”

(Of course, we’ve spent much of the last day speculating as to whether we could possibly get released on Sunday, or maybe even Saturday.)

In the meantime we’re both trying to stay focused and working off our laptops (Mike is typing one-handed as I write this while the other is soaking up all those antibiotics). I’m really enjoying the French fries down in the food court. I had a crème brule latte this morning and wasn’t that impressed. I ventured out of the hospital last night for the first time to find a local spa – where I decided to get the traditional Thai massage because it was significantly cheaper than the Swedish oil massage. I won’t make that mistake again. She twisted my body into positions I hadn’t known I could achieve, and she yanked me into some of these positions while standing on me. It was like being mugged by yoga.

Today is an anniversary of sorts for us – three years ago today Mike emailed me for the third time. It was a lovely long letter that basically inquired as to whether I might like to embark upon a long distance relationship with a virtual stranger. We all know how that story ended. Or, rather, how it started.

So, tonight, if they let Mike off his plastic tubes at some stage, I’m going to take him on a surprise field trip date to the rooftop garden on the sixth floor to mark our “anniversary”. Then we might stop at the nursery and look at the babies. I spied a dozen babies yesterday through a giant glass window – all these impossibly tiny bundles neatly lined up, fast asleep. I stood for a couple of seconds and watched them. It was like visiting a pet store and watching the puppies, only much less entertaining. But, hey, good entertainment is a bit in short supply around here at the moment so wandering past the nursery will just have to do. That and Haagen Dazs ice cream bars.

Thank you all for your messages of support and apologies that I haven’t been able to get back to you all yet. We’ve been really touched by all the blog comments and facebook comments and emails that have flooded in. When you’re clothed in green PJs and far from home it’s really nice to know people are thinking of you. I sure hope you’re all having a good week and that your sensible and cheerful selves are reigning supreme in your own internal kingdom.

About two hours after I posted A Tale of Two Right Legs I got a call from Mike at the office. Our emergency evacuation medical insurance company had gotten involved. Given Mike’s history with this particular set of bugs, they wanted him to go to Bangkok.

It all happened very quickly after that. We made the decision that I would come with him, and the insurance company made the reservations for both of us on the 2:20 flight to Bangkok. We packed in less than an hour, got to the airport, finished paying for my ticket with a credit card forty minutes before scheduled take-off, and we were on our way.

The hospital here is, well, lovely. We have a private room, there’s a couch in here I can sleep on, and if it weren’t for the fact that neatly dressed nurses keep coming in every couple of hours to take Mike’s blood pressure or hook up another bag of antibiotics to his IV, I might forget we were in a hospital – this place looks more like a particularly sterile hotel.

It’ll take a couple of days to get last night’s test results back, but Mike’s already on a cocktail of IV antibiotics that the doctors seem fairly confident will kill the staph.

I’ve found the last couple of days a little bit overwhelming. Not overwhelming in a bad sense, thankfully. But I have been overwhelmed by all the reminders inherent in this whole experience of how much Mike and I have to be grateful for in this life – how ridiculously blessed we are. We were talking in the taxi to the hospital about Sommai. He had the same problem Mike does now. He did not, however, have our options. We are profoundly grateful for our options.

We are also thankful for good medical insurance, and for co-workers and supervisors who prioritized caring for staff and strongly recommended we come straight to Thailand. Emails and comments on facebook and comments on the blog have poured in from all over the world to remind us that people are thinking about us and praying for us. We feel cared for in more ways than one.

Thanks all, I’ll keep you posted when I can. 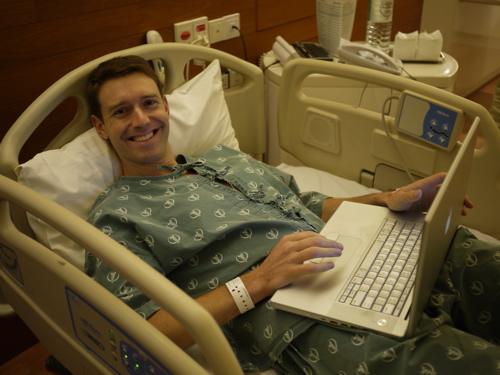