Dominic’s leg: The ugly, the bad, and the good.

We’re here at Bumrungrad hospital in Bangkok. I tried to organize this into some sort of coherent update by good, bad and ugly categories, but I not feeling coherent enough myself yet to pull that off. So, in no particular order and with no particular artistry, here’s what’s going on.

Bad: Despite our insurer’s best efforts, it took us more than 30 hours to get Dominic to Bangkok after the break. During that time we splinted his leg using cardboard and gauze (Mike’s dad did most of that, actually) and kept him as still as possible. We slept him on the change-table mat on the floor and I fed him by kneeling over him. I also managed to feed him on the plane without taking him out of the car seat (which I think I should get some sort of acrobatics award for, and maybe an honorable mention for sacrificing dignity). During these last 48 hours there have been several times when I really wished I had not slacked off on yoga after Dominic’s birth.

Good: This is our second medevac with our medical insurance company, International SOS, and they continue to impress (and when I say “impress” I mean: I would like to kiss every single employee of that company plus anyone who sits on the board).

They made probably a dozen phone calls to Laos to keep us updated on their efforts and a doctor walked us through how to splint the leg ourselves. They flew a doctor up to Laos to escort us back to Bangkok on the flight. We were met at the gate and whisked through the diplomatic channel at immigration and customs and then met at the curb of the airport by an ambulance and two nurses.

Bad: In the ambulance the nurses and the doctor who’d travelled with us were in frequent communication with the team waiting for us at the hospital. They told me they didn’t want me to feed him after 4pm because they’d scheduled him for surgery at 8pm, and then they put the sirens on the ambulance in an effort to get us to the hospital faster so that I could feed before the deadline.

Running the ambulance sirens because the baby needed to kin nom (drink milk) would have been funny … except that it wasn’t. Also, the sirens were a nice try, but they didn’t make much of a difference in the middle of Bangkok traffic jams. We sat on the freeway within sight of the hospital for more than 30 minutes (which, if things have been dire, would have been mind-blowingly agonizing). 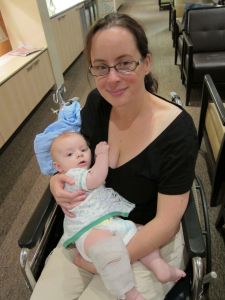 Good: Bumrungrad is the nicest hospital I’ve ever had the (dis)pleasure of spending time in. The place looks more like a nice hotel than a hospital and the staff seem phenomenally efficient. With one exception (see the next “ugly” point) I’ve never had a moment’s doubt that we are receiving top of the line medical care here.

Good: Dominic had been X-rayed and seen by two specialists within an hour of walking into the hospital. During the first consult they told us that they would take Dominic to surgery, set the leg under a general anesthetic, and put him in a spica cast (a both-leg rib-height body cast). Then they changed their mind. They could set the leg without surgery, they told us. This initially seemed like good news, but…

Ugly: They didn’t mention anything about a game plan for pain relief. When I strongly requested they make such a game plan the nurse went away and came back with … oral paracetamol – the same thing I’d been giving him for the previous 36 hours. I argued that they should at the very least give him paracetamol and codeine, but the doctors told me that they only ever use paracetamol or a general anesthetic – nothing in between – and they had no experience with giving codeine to infants so they just wanted to “do it natural.” As if there is anything “natural” about breaking the end off your femur. I was so angry. Mike had to be the one to take Dominic in to get the leg set. I couldn’t face it.

Ugly: The break is bad and complicated – all the way through the femur, right above the knee and in the growth plate area. For those of you who haven’t had a crash course in orthopedics lately, that’s bad news when it happens to a baby at this stage because there’s a chance that it’ll disrupt normal growth patterns. Dominic will have to be monitored annually by X-ray for the next few years (1 yr, 2 yr), then every two years (4,6,8) and then annually again up through the teens.

Good: The break was set by 6:30pm (less than 2.5 hours after our arrival at the hospital). And in the end they did not have to put Dominic in a spica cast, just a hip to toe cast, and that will probably only have to stay on for three weeks. X-rays today reveal that the set helped realign – even my untrained eyes can see the difference and the doctors seem pleased. They also told us that the specialist team met again and they think the chance of us having ongoing problems has dropped slightly. They’re not sure, but they think the break occurred just above (by 1 cm or less) the growth plate. If that’s the case, the long-term prognosis is better.

Good: Dominic slept quite well last night, all things considered, and has been relatively content today with only a couple of crying jags. We’ve even had some smiles. It is a huge relief to see him in less pain.

Good: Despite how harrowing the last two days have been, we remain acutely grateful that we have the resources and the networks that allow us to receive such excellent medical attention. These have been some of the worst days of my life, I cannot really fathom how much harder they would have been without the resources that are available to us.

So that’s some of the good the bad and the ugly from this end. To finish, here’s the “lovely”. The insurance company had flowers and a teddy bear delivered to the hospital. Dominic was a fan … of the ferns, anyway. 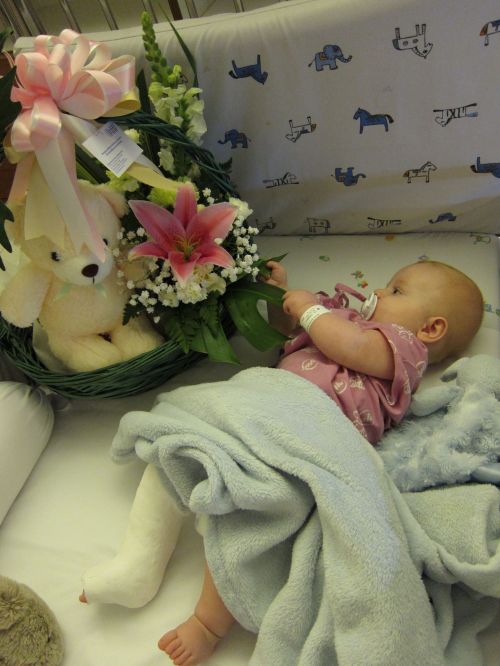 Love and thanks from Bangkok,