It’s been a while since I updated you about our little chew monster (aka kea-puppy, shark mouth, demon dog, and Zulu) so here’s a puppy post.

We had a “clueless parents faced with a defiant toddler” moment this week. Zulu is, on the whole, a sweet and friendly dog. He adores people and when we walk him he looks up at the passerbys, wagging his little tail, clearly curious as to why they’re not stopping to shower him with affection and attention. He takes himself off to the toilet outside. He doesn’t chew on the furniture, our shoes, or destroy our trash can. We must admit that he is, overall, an excellent puppy.

Two things, really. First, he doesn’t chew on the furniture, but he still loves chewing on us. The minute we sit on the floor he’ll climb (or, more frequently, leap) into our laps then immediately start chomping on our hands and arms. As he is now significantly bigger and stronger than he was when we bought him home this can really hurt. We’ve tried all sorts of things, but so far nothing’s worked except coming to love-fests armed with a chew toy to substitute for our more delicate fingers.

Incidentally, the vet we found here suggested we cut off or file down his canines to render this puppy biting less painful – apparently that’s standard practice here. Puppy lovers never fear, that’s one practice we won’t be adopting.

On Saturday our neighbor bought over a treat for him – a big, meaty, raw, bone.

How did Zulu show his thanks for this unexpected bounty? By jumping up, ripping the gift out of her hands (plastic bag that it was still wrapped in and all) then scurrying off with his prize.

When Mike went to unwrap it for him he was rewarded with a growl. A serious, “I’m not messing around here” growl. And it was when I heard this and said we should take the bone away for a little while to show him who was boss that the trouble really started. When we went near him with his new bone our sweet, lovable, affectionate puppy was transformed into a snarling, growling, hellion who did his best to bite us – really bite us – and twice succeeded.

I did some research online while Mike engaged in a battle of wills with Zulu over the bone and was deluged with contradictory advice regarding how to deal with this behaviour.

Some sites said that a puppy who growls over his bone is confused about his place in the pack and is trying to dominate us. We should, these sites said, pin him to the floor, smack him for being aggressive with us, and take away his treat.

Some sites said that he wasn’t trying to dominate us at all, merely instinctively guarding something he thought was very valuable. Punishing him harshly for resource guarding, these sites said, was only likely to make him guard more fiercely and earlier in the future as he’ll have learned that we (unpredictable owners that we are) tend to swoop in and take away his treats with no warning. Instead of punishing him this time we should work on gradually teaching him to let us give and take away at will less valuable items – toys, smaller treats, etc – and work up to things like raw bones.

“What do you think?” Mike asked me, washing the blood off his hands – the fruit of his latest “I can take your bone away because I am your pack master” foray.

“I don’t know,” I sighed, watching our recalcitrant puppy, who was crouched under the stairs keeping surly eyes on us even while he chewed away furiously.

“I guess this is like parenting,” Mike said. “People tell you different things and sometimes they conflict and in the end you just have to trust your instincts.”

“What do your instincts say?” I asked.

“Smack him,” Mike said. “Smack him hard for trying to bite us, and keep taking it away until he learns.”

“Yeah.” This time Mike sighed. “I bet you were that puppy.”

So, puppy lovers out there, any thoughts on this? I think we have a strategy in place we both feel good about now but I’m curious about your experiences with your dogs guarding their food. Oh, and any advice on how to stop Zulu from chasing chickens that are unwise enough to wander onto this property also welcome.

Until next time, here’s a look at Zulu in action the other day… 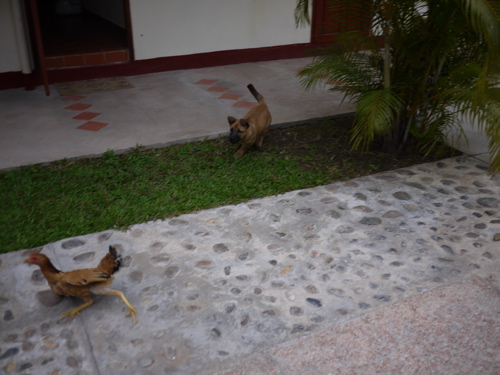 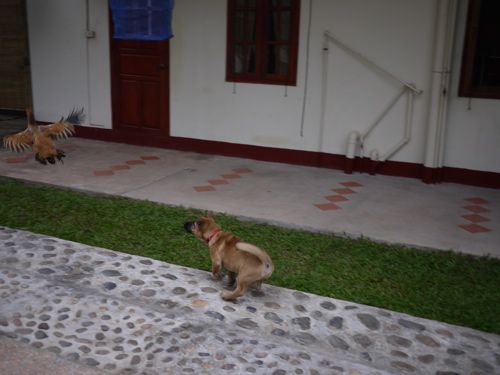 Posted in Life in Laos, Parenting