On Saturday we went on an adventure.

Kuang Si waterfall has been on our radar since we arrived. Before this week, however, it was always edged out by other fantastical adventures such as buying an ant-pantry, spending hours drinking pepsi and eating pig fat, or simply collapsing in a heap on the bed on Saturday afternoon and wondering if we will ever stop feeling quite so tired during every spare minute that we have. 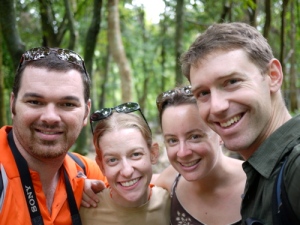 But last week we had our first visitors in town, and on Saturday morning we had six spare hours before we needed to get them to the airport. So it was adventure time.

The 30km road out to the waterfall wound through villages, and small valleys cradling the precious rice fields. Everything was brown bamboo, or a determined bright green. Clouds skipped around on the mountaintops. The occasional, flirty, shower kept the worst of the heat at bay.

When we reached the falls we found ourselves faced with a choice. Should we walk up the paved road to the top of the falls and start there? Or should we start from the bottom and work our way up to the falls on the muddy path that ran through the woods alongside the river?

I got to choose and, somewhat to Mike’s surprise, I think, I picked the muddy path.

I would like to be able to say that this is because I am a naturally-adventurous, stream-fording, muddy-path-loving soul, and that given a choice between a paved road and a muddy path I will pick the muddy path every time.

But that would be a lie.

The truth of the matter is that I figured we’d go up one way and come down the other. And when faced with the prospect of something that I think might be slightly less than fun (a dentist visit or a muddy path, for example), I will generally choose to get the unpleasantness over and done with as quickly as possible and save the paved road as my reward.

Except, this time, the paved road didn’t turn out to be my reward – the muddy path itself did.

Just after we set off through the trees we came across an enclosure, a very large enclosure. I was stunned to see that it was full of black bears snoozing in bamboo hammocks and playing with tires.

“Where did the bears come from?” I asked.

Mike did not seize the opportunity to mock me for this ignorance – possibly because he was too busy taking photographs of himself in front of the bear mural.

After the unexpected treat of bears, the muddy path took us first to an Elysian pond at the bottom of the falls. Big, braided, ropes of water from different hillside channels poured into a clear pool. The encircling trees leaned in towards the water – reaching for a drink. A cool spray drifted out and touched us.

Twenty steps up the path there was another pool. Then another. And another.

We kept wandering up for ten, maybe fifteen, minutes. Past pools, and falls so small they were just a wet step down, and falls so big they would knock you over. Past dripping trees. And ferns. And picnic tables. And charmingly stilted signs warning us where not to swim.

It was only after this walk up – after this long, slow, reveal – that we reached the source. And even after everything that had preceded it, I was unprepared for the sight of all that water – white with its power, pushing and rushing, tumbling fifty meters through trees and over rocks to start it all. 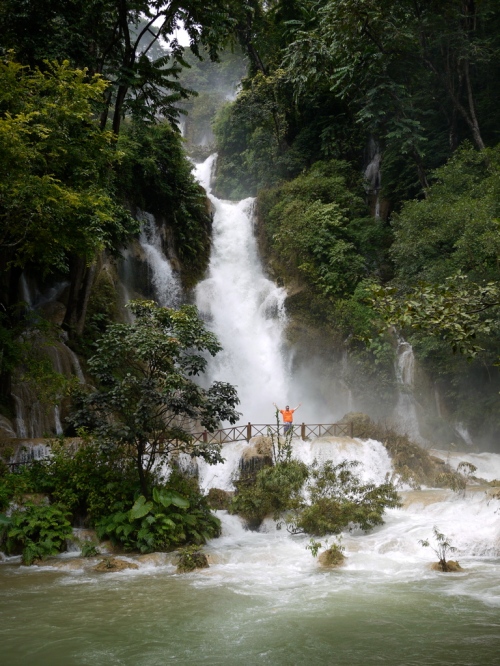 We went swimming after that, the four of us. We waded in, feeling our way forward over slippery rocks, yelping at the cold. We braved the currents, struck out towards the middle of the pool and found a fallen tree to perch on. We sat on rocks and talked. Or, in Mike’s case, at least, we covered every inch of that pool, exploring. 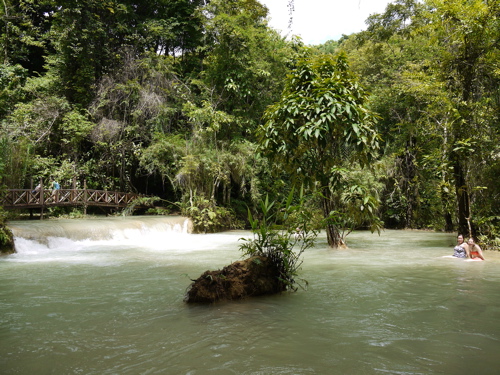 Expectations are tricky things, aren’t they? Mike has a saying I hear often (usually while he’s making fun of me): “Expectations minus reality equals disappointment.”

We’ve all had the experience of expecting great things from a movie, or a book, or a person, and then having the reality of our experience not quite measure up. It does hurt when reality falls short of expectations. Sometimes that hurt is nothing more than a minor, transient, disappointment. Sometimes that hurt is considerably more painful – the perfect breeding ground for misunderstanding, wounded feelings, resentment, and other ugly aspects of conflict.

The reverse can also be true. Sometimes when I have low, or no, expectations I am totally blown away by beauty that’s all the more thrilling because its sudden appearance is such a surprise. This was true of my travels in Turkey, and things that happened after I published my first book. It was true at the waterfall on Saturday.

On the other hand, there have also been numerous times when a little more forethought and a few realistic expectations would have prepared me to deal much more effectively with a challenging experience – so I don’t think that the answer to this dilemma is keying my expectations as low as I can force them to go and refusing to learn about anything new that may be coming down the track.

But, as for Saturday, I’m glad that I didn’t know what to expect. And I’m especially glad that we worked our way up to the most powerful, dramatic, manifestation of all that beauty the long way – walking through the trees, alongside the stops and starts of the pools and preamble falls. There was something about that process that felt mystical. It felt right. It felt like a preview of how we long for our very lives to play out.

Posted in Life in Laos, Posts with photos

Mike and Lisa are having breakfast and talking about The Moth GrandSlam next Tuesday. Lisa hasn’t figured out which story she’s going to tell. She is much more concerned about this state of affairs than the fact that she will shortly be late for work.

Mike, who can see the clock from where he’s sitting, glances over and jumps up.

Mike: “You’re going to be late – you better go put on your makeup.”
Lisa: “I have my makeup on!”
Mike (realizing the gravity of the moment, crosses the kitchen and takes Lisa in his arms): “OK, let’s review. Why do women wear makeup?”
Lisa: “Mostly for themselves, obviously.”
Mike: “And why is that?”
Lisa: “Well, because they want men to notice and love them!”
Mike: “But what’s the problem with that?”
Lisa: “You don’t love me!”
Mike: “Clearly, yes, that’s your problem.”
[Lisa stands still and lets herself be kissed.]
Mike: “No, the problem is that men don’t notice. You want to wear makeup? You’re on your own.”

Posted in Lisa and Mike dialogues